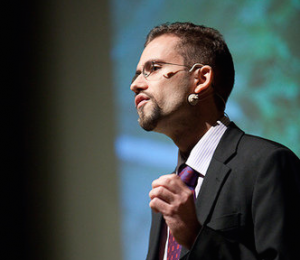 I’m passionate about providing critical analysis that helps industry and government transition our energy sector to a low emissions future.

I’m particularly interested in the integration of renewable generation into our grids, how electricity markets could (or should) evolve over time to provide the right signals for investors, and how investors can best structure their projects to obtain – and hence deliver! – maximum value.

I draw on a broad background of physics, engineering, policy work and economics to deliver a big picture view – while still undertaking detailed, quantitative analysis to make sure recommendations are backed up by hard data.

Past projects have included advising the Queensland Government on a 50% renewable energy target for Queensland, undertaking market modelling of the Renewable Energy Target, and book chapters on market design and long-term planning. More details on LinkedIn, and on this website here. 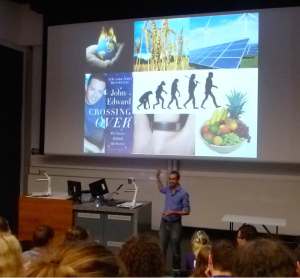 I am currently co-host of Food Lab on SBS Food, where I talk about the science behind cooking. I also host two weekly segments on kids’ TV show SCOPE. I’ve previously featured on Catalyst, and a range of other fun shows.

My specialty is food science and novel cooking methods, but I’ve previously spoken on quantum mechanics, particle physics, astronomy and climate change. I am also passionate about rationality and science based policy.

I’m the MC of BrisScience, a series of free public lectures on cutting edge science held in Brisbane. I’ve also presented in countries around the world, including Kenya, Bhutan, Sri Lanka and Antarctica (albeit only to penguins). More details here!

In addition to my science communication, I often MC, chair or host other events. I was MC at the fantastic Women in Technology Awards in 2018 – and again in 2019, where more than 1000 people came together to recognise some truly amazing women! I’ve also chaired panel discussions for the Brisbane Writers Festival and domestic and international energy conferences,  of course, the obligatory weddings and birthday parties.

My extensive speaking experience is backed up by a history of acting, improvisational theatre, stand-up comedy and working as a magician. For special events, I also include magic, custom comedy songs or parodies, and circus based performances. Check out some of my performances!

I have a PhD in physics from the University of Queensland where I worked on developing models for biological systems such as vision in the eye and photosynthesis in plants. My project worked towards developing models of biomolecules that could reveal fundamental principles of biophysics, an approach that has been very successful in other areas of condensed matter physics.

In 2014, I took a partial sabbatical from my day job to do research at the University of New South Wales into renewable energy and energy markets. 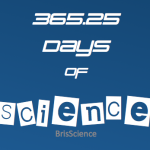 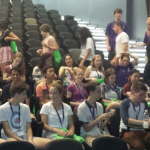 As someone who has never seriously considered the possibility of a career in any science, ...
UQ Young Scholars keynote 2014
View All